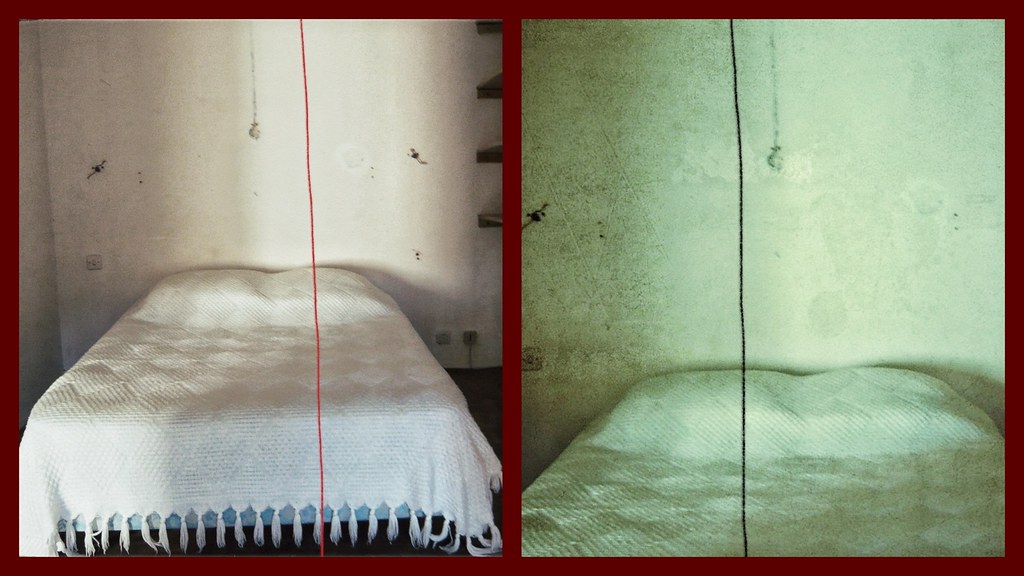 We’re at Fran’s going over the some videos for our project. It’s late, still, and steamy. The window AC has shorted out, so we make do with a box fan with bowls of ice in front. I’m still optimistic about the our film, Life on Assumption Street, but Fran? Her feelings are all over the place. Me, I think we have stumbled onto a gold mine.

Sure, we’ve just gotten started, but what with the Big Wind the other night and all that has happened since then on the street? The Incident at the VooDoo Doughnut Shop? The death of Ro-chelle? The kidnapping of her baby sister Mee-chell? Dick Sepulveda moving out? And Dorothea Perinne, what became of her? We’ve got a blockbuster on our hands: if we don’t lose our nerve, that is.

Fran and I have been seeing each other for over a year, so I think I have a clear fix on who she is, what turns her on and off. But I could be wrong. She teaches English at Chandeleur County High and is pretty level-headed. As a matter of fact, I count her as the only sane one among my small group of friends, which makes her reaction to the video of this kid Dylan’s antics all the more troubling. Where does it come from, her taste for dick-level humor? What secrets is she keeping from me?

When the interview ends, Fran slaps my knee and says, “Christ, Clove, this kid’s a natural. You couldn’t make this up!”

“Ah, well Fran, it only gets better,” I say, hoping with my chipper tone to lure more revelations from the dark and shuttered corners of her psyche.

“Okay, fine!” she gasps while making circular motions with her hand. “Bring it on!”

We sit and watch another thirty minutes of moving day at Dick Sepulveda’s and the antics of the hapless Sepulveda brothers, but after Dylan Roof’s interview, the footage is tame stuff. The guys get the Frigidaire loaded into the van. They flop down for a rest on the front porch and drink glasses of what appears to be iced water but could be vodka the way they’re horsing around. That kind of thing.

When I pause the replay, I see that Fran has regained her composure. She hikes back the kitchen to fetch both of us a bottle of beer while singing verses from an old Radiators song, “Papaya,” a favorite of her father Mike’s. Fran never tells me much about him. He lives alone, a widower. Fran won’t talk either about her mother Abeline, who died last year of this killer amoeba in the swamp water. I worry for the dark caverns in my Fran’s mind. Pop-pie-ya, pop-pie-ya.

I restart the video and when it reaches the part at Dick Sepulveda’s where the cabbie drives up in that huge Lincoln, Fran grabs the remote and says, “Enough of this. Show me the Dorethea Perrine footage again.”

And so I pull up the sequence I have begun to rough cut.

Montage of the emergency entrance drive, sliding glass doors opening to the emergency waiting room, gurneys being rushed down beige hallways. During the montage, we hear:

Dorethea Perrine succumbed to her illness two hours ago, one day after being admitted to the emergency room here at Chandeleur General, but the doctors have been at a loss to specify in the death certificate the exact cause of death. Dr. D.D. Commings is chief of the ER and has called a press conference to offer an explanation.

Establishing shots of a small, hospital-green meeting room crowded with reporters and photographers and cameramen. We close on the podium resting on a folding table. Dr. Commings enters the room and takes his place behind the bank of mikes clustered in front. He is a tall man with a gaunt, Lincolnesque face (pre-beard) and wears a starched white lab jacket and green bow tie. His voice is unexpectedly high-pitched and scratchy, like antique wax recordings of Enrico Caruso, William Jennings Bryan, W.C. Handy.

Ladies and gentlemen of the press, I hope you will be patient for a moment while I outline my theory that Dorothea Perrine died of morbid melancholia. (rustling and gasps OS) Yes, I know that morbid melancholia is a long-forgotten medical condition, but I can ascribe no other cause. She simply expired of brain failure brought on by overworked despair. That’s what I decided on for a COD . . . Cause of Death. Miz Perrine’s brother, who is her sole survivor, has asked that I reveal no details about funeral arrangements. His wish is for a quiet service. No press, not even at graveside. Now I will take questions. Yes, Grace.

Grace Curtain, Bay St. John Sun-Gazette. Dr. Commings, would you please explain what obsessed Dorethea Perrine? We have been told that she heard voices, specifically the Virgin. I mean, was she a modern Bernadette?

Miz Curtain, all I can tell you is what I know. Dorethea Perrine’s . . . um, status vis-a-vis the Church is out of my . . . Let me put it this way. Before she passed into a coma, Miz Perrine told the attending nurse a story that is, well, too disturbing to reveal in a public forum such as this, but it ended with a prophecy. Why don’t we just leave it at that. Next question? Mark?

But wait, doctor! Come on! Can’t you at least give us the prophecy?

Well, to tell you the truth, Grace, what Dorethea Perrine said was not a prophecy so much as a jeremiad (cutaway closeup of Grace Curtain scribbling on a notepad) . . . more of a lamentation, really. A woe is us kind of thing typical of acute melancholia. Mark?

Thank you, Doctor. Mark Wisher, WMBX Channel 9. I’d like to follow up on this morbid melancholia diagnosis, if I may. Isn’t this just an outdated term for what we today simply call depression?

Yes, Mark, you raise a good point. But let me remind you that morbid melancholia goes way, way beyond a list of symptoms of depression in a medical guide.

I guess what I mean is, did Miz Perrine have to die, given all the modern treatments for depression? Drugs? Therapies? Special rest homes?

Yes, treatments are available—and effective—for depression as defined by the AMA and the APA, but in my opinion textbook depression is not what afflicted Ms Perrine. Her soul weariness is not mentioned in the modern literature. Look, a death from depression is defined loosely as the failure under extreme anxiety of certain brain functions brought on by chemical imbalances, genes, what have you. So, yes, we could have sedated this poor woman and locked her away for her own safety and the safety of others. It’s done every day. If, that is, she had come in sooner. But in this case, time had run out. Dorothea Perrine slipped into her final coma before we had a chance to try any of the common remedies. So my point is, in the end, I’m convinced that modern techniques would not have saved her. Modern science depends on facts you can measure. You cannot measure or quantify soul weariness unto death.

(A dozen hands fly up as Mark Wisher sits down, but he is shaking his head. Dr. Commings’ words have not reassured him.)

(Dr. Commings points to a slender, dark-haired woman in her forties dressed in a clean denim shirt and jeans. She stands.)

Your name? I don’t recognize you—you’re not one of the usual suspects at these events.

(While the press corps sniggers at the doctor’s unseemly levity, the woman brushes long strands of red hair behind one ear. As the crowded room settles down, she speaks in the tone of a high school English teacher. She is calm but hard as a ball bearing.)

My name is Fran, Franes Madden. My partner (points at camera) and I are working on a documentary about life on Assumption Street, where Dorethea Perrine lived, and I’d like to know, well . . . Have there been any other cases in Chandeleur County like hers?

I don’t know if Chandeleur General keeps a tally, but from my own experience, I’d say the malady is not uncommon these days. I have treated patients in varying degrees of melancholic distress, but none quite so . . . um, terminal.

Would you say we have an epidemic of melancholia in Chandeleur County?

Epidemic? That’s a pretty big word, Miz Madden. I would hesitate to call it an epidemic. Yet.

“Switch it the fuck off,” Fran says. “I need some fresh air.”

And so I switch it off and say, “Come on, let’s drive out to Point Youx and lose a couple of bucks at the Pirate.”

“Clove,” says Fran, her eyes wet and hot, “we gotta find out what Dorothea Perinne’s prophecy was.”

“In due course,” I respond, eking gentle into my voice. “But first some prayers for forgiveness at the slots.”

“Yeah,” she says. “Nothing beats the melancholies like a slot machine.”