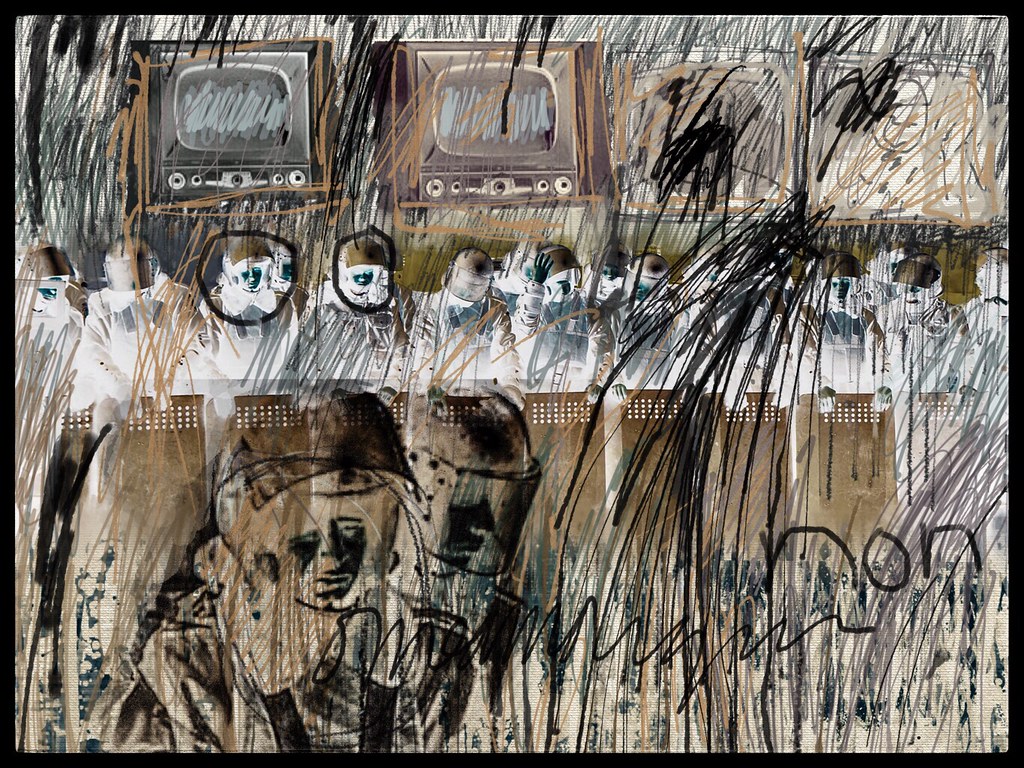 (This is taken from a typescript draft of an idea for a history of the future.)

Notes on a Play by Connie M.

It was a time when a Fear swept through the cybersphere. Fear of what? Doesn’t matter. It was just raw fear, a gut-ripping, pointless fear. Among the People, anguish and foreboding sought an enemy. So I wrote a play.

Bless their thespian hearts, the World of Salvage Players went ahead and performed as scheduled. This was a brave act, for which I am deeply appreciative. I well know that their anxiety about the Fear was no delusion. The threat of direct intervention by the forces of order was real. Action by the Reality Patrol was imminent, and the crackdown, when it came, would be stronger than just a few hecklers placed in the audience. The World of Salvage Players are used to being poked fun at—disdained even—we are semi-pros, we can take it. But when a Fear is coursing through the cybersphere all bets are off.

When a Fear erupts, we are abused.
Outside our venues up and down the Coast
Protesters with placards chant obscenities.
Death threats, we get those, too, both
Digital and analog. Kicks, spits, bites,
We get it all. The Real News Media sucks it up into the Fear,
The Fear fueling itself with the anguish it creates
When the Boss names the latest target for abuse.
This abuse is no argument. We sapiens know how to argue,
Debate, be suspicious, curious, ornery. We sapiens
Love reason but can be irrational.
No, the Fear is
Something else.
Cruelty unhinged?

Anyway. When my play, “Ring in the Window;” was performed at the Twelfth Chandeleur County Festival of the Performance Arts last July, I was not in attendance. I had been locked up.
What happened was this:

The night before the premiere, agents from the Reality Patrol jumped me and locked me in a tiny room at the Reality Revival House over in Port Sulphur. An attendant told me I had been diagnosed by a Reality Specialist as suffering from paranoid delusions so severe that I was considered an incipient psychotic and a threat to the Will of the People for what I had written—for daring to write at all. My Reality Specialist said I required immediate care, possibly long-term. For my own good, yes, but above all, for the good of the People.

In my play, a woman has been taken into custody
For her own good — and for the good of We the People.
Her malady is the same as mine, incipient psychosis.
Delusions. Fantasies all about life outside the cybersphere,
Beyond the reach of the Boss
And his thugs (known with some irony as
The President and All His Men),
Where the Debordist microsocieties medicate
With home-grown cannabis, and
Fuel the old Dodge pickup
With bootleg turpentine from the
Outlaw distillery over in Port Sulphur, and
Rebuild old flat-head six engines, and
Stay, as often as they can manage,
Downwind of the county landfill
Spewing radiation from illegally buried
Spent nuclear reactor fuel.
That sort of thing.

So Connie, the protagonist, resists her warders by organizing the other incipient psychotics on her ward and stages a strike, the first such act of rebellion ever at a Revival House.

Her act of resistance takes the goons by surprise and, for a while, Connie and her loonies run the show. Like Alan Bates in King of Hearts but with a tragic ending.