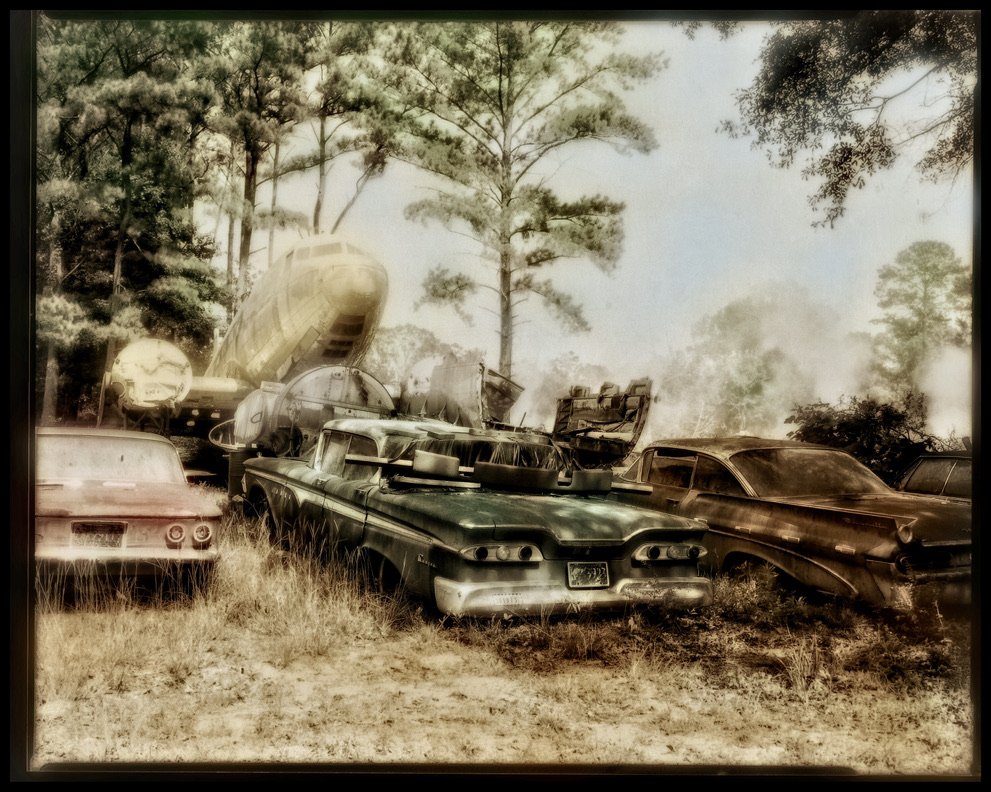 Photograph by DC Young, taken in the Piney Woods of Mississippi c. 1990.

In the first part of Sil’s story, we met him meditating while waiting for the bus to Port Sulphur and ruminating on his acceptance of his fate of living a lackluster but not unpleasant life in his cabin on Bayou DeSang but with intimations that this state of affairs was about to change.

In Sil’s pants pocket was a folded invitation to his wife Cynthia’s cousin Harriet’s wedding to that lunkhead Bison Skullcap from up at Deer Lick. He pulled the card out and unfolded it and read it again for the dozenth time. He told himself he just wanted to check the date, but his worry-mind knew the truth, which was that he, Sil Worthy, had no intention of appearing at the Harriet-Bison nuptials. No way. Especially not with deeper issues boiling between him and Cynthia, what with the immanent arrival of a lightning bolt from the auld lang syne in the form of Allgood the Messenger.

Sadly, he also had no clue as to how to avoid his wife Cynthia’s wrath when he told her he couldn’t go to the wedding, which he knew would lead to hours, even days of rancor, hard looks in the bathroom between baths, snide words of greeting and parting—the kind of bickering that had become the norm over the smallest issue. Until now, Sil had consoled himself with the thought that, after a dozen-plus years of marriage, it could be worse. Now it was about to get much worse.

He fingered the embossed card stock, an ecru with genuine deckle edges—an extravagant flourish that once would have offended his anti-bourgeois tastes but now only gave him a twinge of wry disdain. So the fuck what, my right? If that’s what they want. Anyway, the date was exactly what it had been the last time he looked: four weeks from this coming Saturday, which was also the date when Allgood was expected to arrive.

Allgood the Messenger. Allgood the Survivor, one of the last of the old Red Rosa Faction, he was still traveling, still keeping the old gang connected, consoled, amused, commiserated with—even replenished with emergency rent money or cash to pay off a bookie. Allgood, a devoted scholar and poet had been a frequent contributor to the Cleveland-based underground paper, Buddhist Third Class Junkmail Oracle, back in the day under his codename. Now he was the harbinger of consequences for misdeeds that had not been squared. Allgood never brought good news.

This piece is a companion to “One Night at the Voodoo Do-Nut Shop” and introduces Sil Worthy to the series “Assumption Street” which continues unraveling the intertwined lives of various denizens of Chandeleur County on the Gulf Coast.