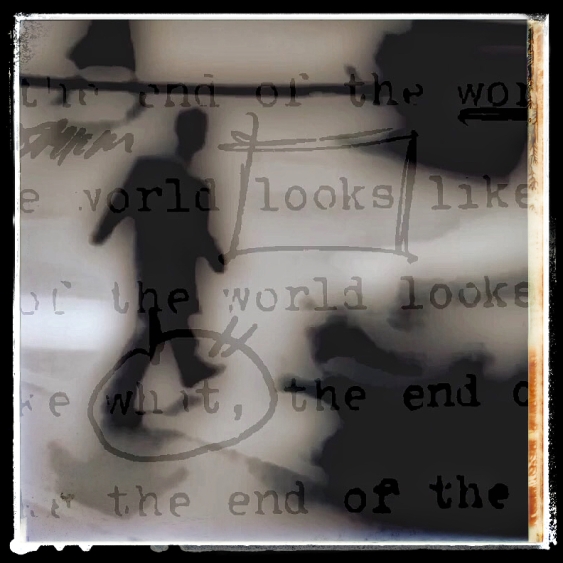 Our story so far: Sil Worthy, a survivor of the counterculture wars of the Sixties who lives with his wife Cynthia in a cabin on Bayou DeSang in Chandeleur County on the Coast, is traveling on the Greyhound bus one hot July day across the county to Port Sulphur and has fallen into a fugue state plagued by memories of his youth and the immanent arrival of Allgood, an old crony from his days in the underground resistance to the War. In his replay, he and Minnie Bloom, leader of the Red Rosa Faction, are plotting to stage a bank holdup to get some attention and raise cash for their cause.

For previous parts of Sil’s story, go to the Assumption Street page for links and other related material.

The first week of Carnival that year, the group was seated at their table at Fun’s Chinese on Decatur having their usual pointless discussion with Minnie sitting there looking impatient but somehow in touch with a deeper truth. More tea was ordered and in walked this guy that Sil knew, Shim Laster, who had this uncanny talent for robbery and who might share his tricks in return for dinner. Shim sat down and said: “Okay, I’m hungry.”

And so it was that Sil got the call to learn from Shim how to seduce someone into handing over money without having to show a weapon. It turned out that one needed talent—a particular gift—to pull this off, but Sil did not have it. He thought he did. In fact Shim encouraged this fiction, saying “Yes brother, yes brother, yes brother, you’ve got it there, so now where is my plate of moo goo gai pan ? . . . Ah, thank you.”

Sil later figured that it would’ve turned out better if the Red Rosa Faction had spent more time practicing than depending on his ability to mesmerize a bank teller into handing over the cash. To achieve a good robbery you needed practice, practice, practice. It was a lesson they learned the usual way for amateurs.

On the morning of 20 February Sil and five of the Red Rosa gang—they called themselves a gang but laughed about it thinking, Wow, we’re no gang so send us home, yes, send us home, but nobody went home.

They met around the corner from the Gravier Street entrance staircase of the Hibernia Bank and they whistled a lot, smoked cigarettes, joked about their shades and hats, and worked at looking bored. When the bank opened at nine, they went in and stood in line with Sil at their lead. He wore a plaid shirt, like a dock worker. It was a warm day for February and he was sweating, which made him nervous, feeling the sweat, wincing at the smell of it, shivering at the cold wetness under his arm.

When he stepped up to the teller’s window all confidence drained out of him like water seeping out of a colander of collard greens. He needed something instinctive from deep inside, something subliminal that he did not have in his gut, a cunning that could be read in his face and heard on his voice by his victim no matter what.

Just when he was about to indicate to the teller what his intentions were, a guard walked up and asked him if he would please step to one side and show him some identification. Sil didn’t know what to do, so he bolted for the door, ran like some hellhound was on his tail. The gang followed.

The guard, an old codger he was and unarmed, tottered after Sil and the gang as they fled out the front door and down the broad front stairs. The old fool fell and banged his head against a column. The cut wasn’t deep but it was bad enough to cause the poor man to bleed as if he had been stabbed by a sword. In the confusion, all the Faction would-be robbers scampered out into the welter of mid-morning pedestrians on Gravier Street and scattered into the city and beyond into the world and so ended the great Hibernia Bank Holdup.

Sil unraveled his emotions as he sat in the front window of Archie’s Cafe across from the Port Sulphur Greyhound depot nursing the cup of weak coffee and smoking a cigarette.

What brought that on? Why again the ancient rage ripping holes in his world? The winds howling again, his head caught in a storm which could not be escaped but only avoided for a moment?

He admitted that he would have surrendered his will to Minnie if she had asked. How could he explain it? What was it? Some insane, abnormally intense power in her eyes that seduced his ability to reason? Was she some Svengali-Weatherwoman who could induce him to put his own well-being at risk? Was it love?

Well, of course if was love of some sort. If not romantic and sexual, then maybe something deeper, a psychic twitch beyond the grasp of reason. And here he was, all these years later, sitting alone and broke in the window of Archie’s Cafe in Port Sulfur, Mississippi, still twitching for the love of Minnie.

After the Hibernia fiasco, he had escaped Algiers to live the piano bum’s life incognito up and down the Coast. He barely survived until he finally ended up back in Chandeleur County.

But he could not run from his love of Minnie Bloom any more. It has found him again, it was here now, in his oak trees behind his and Cynthia’s cabin, in his yard, in his house, in his bed.

Allgood was on his way to deliver Minnie’s new call to action. Cynthia wasn’t going to like this. Sil wept.

Stay tuned for Part 6, in which Sil considers his options and what Smith might advise.